A downloadable game for Windows, macOS, and Linux

Dungeon in my Pocket is a small game I'm creating for fun to demonstrate the experimental roguelike mode of RPG in a Box. There are currently only a few levels, but more will come in future releases as I build out the roguelike functionality. The game is free to download, but any contributions are greatly appreciated and will help support the development of RPG in a Box. :)

Dungeon in my Pocket is made with RPG in a Box, a tool for easily creating 3D grid-based, voxel-style RPGs and adventure games. Check it out if you are interested in creating your own game!

Assets based on the Tiny Dungeon tileset by Oryx Design Lab.

I'm looking forward to playing games made with RPG in a box. Hope you improve the demo even more.

I'm glad to hear you're looking forward to playing more RPG in a Box games! Thanks so much for playing through Dungeon in my Pocket and sharing it. :) I've recently been working on it some more, including a change to a more colorful palette. You may have seen it already, but if not here's a walkthrough video that I made:

Yes, that is normal. It's currently just a small experimental demo game for RPG in a Box, so there are still a lot of features remaining to be implemented.

Just found this today while looking for games made with Godot. Really fun little game :)
I'd love to see updates to this when you're able. In particular, a score and/or inventory system would make the game feel so much more complete ^^

Thanks so much, I'm glad you like it! :) I do hope to make it into a full game eventually, once RPG in a Box has progressed more and I have some more time to dedicate to this game.

Did you used Godot or Rpg in a Box?

Any free games of yours?

amazing and so fun. I saw your ideas and progress list, please add multiplayer support would love that feature! also plan on to keep contributing to this project! keep up the amazing work! :)

Do you have any plans to upgrade to Godot 3?

Yes, I plan to! Over this past year I've been working on migrating its engine (RPG in a Box) over to Godot 3, once I'm a bit further on that I'll be revisiting Dungeon in my Pocket to also upgrade it and continue building it out.

I gave a donation, it's small but filled with love for a fellow Godot developer. Keep making great titles!

Thank you so much, that really means a lot! :D

Hello, I saw that your game is made with godot, I also use godot but I have a problem
in the icon when I export to windows I get the godot icon, and your game has the custom icono. How did you do it to have the icon? or what version of godot do you use? Thank you

Hi Ned! I am currently using a custom compiled version based on 2.1.1 and have replaced the icon as part of the build. However, I think there should be an "Icon" option in the application project settings.

Well, that was some 10 minutes well spent ! Great to demonstrate the engine capacity. I hope to see "soon" (much) more options to build (much) more advanced games with deeper gameplay.

Thanks Tchey, I'm glad you enjoyed it!

Really cool game! This is almost like an envisioning of the kind of game I've always sought to make years ago as a kid (later 20's now, haha). I'd be very interested in writing music for it if you'd be open to collaboration!

Haha, that's cool! And thanks so much, I'm glad you like it. :) I'm not sure yet about music, but I will keep that in mind!

Hi Exanc, I'm glad you like it! Thanks for playing! I'm planning to add a few more small levels in the next day or two. :) The long term goal for the game is to have procedurally generated levels which should add a lot of replayability.

Did you have the project of making boss.

Yes, I'd like to include boss enemies in some form. I have some creatures that would work well, like a dragon for example. :)

No problem, thank you for the feedback! :)

I can't get past the first floor. it just says "Nothing here yet" and I waited a good 25 minutes and nothing. I tried restarting and waiting again, should I re-download the game?

Hi Nathan, thanks for the feedback and for trying out the demo! There's only one level currently, so the stairs don't go anywhere yet. :) I'll change the message to be more clear about that until the stairs are functional.

Okay thanks for letting me know, I thought it meant nothing was here yet as in i had to wait or do something for something to apear

No problem, thanks again for trying it out!

Do you think this will ever become a steam game? i hope it does, i would pay at least $7.50 for this, Anyways keep up the good work

Thanks! I'm not sure yet at this point, but that would be cool! Although I had originally intended it only as a demo of the engine, I am hoping to be able to turn it into a fully fleshed out game eventually.

Love the view and the camera controls, I'll definitely try this mode as soon as I find a bit of time. I agree with rubemborges' feedback, andI'll add one detail: I think it would feel smoother if you didn't have to press the same key each time you want to move in the same direction.

The sprite conversion is great, it looks really nice, I'm looking forward to the next updates :)

Thanks much, lectronice, glad you like it! I agree about the movement as well. I'll plan to have an update soon with some improvements. :)

It's a cool game and the aspect of a roguelike with voxel's is nice too, but when I played for the first time (and again) none of the mobs attacked me, so it was easy to pass. I felt that I don't know what I pick from the floor, there's no box of text saying "You picked a key" and I feel that is needed the box of text saying "you slayed some mob, or you took that damage" like a progress bar of what are you doing in the game. And is nice if the zoom camera started close to the character (what makes you game more interesting in various details) and the areas that are locked by the door, you can't see what's behind then until you open the door, what makes me think what I'm gonna face behind that door, should I open?.     But congrats and hope for the best of this game in the future :)

Thanks so much for playing and for the feedback! :) Those are all great ideas and are features that I'd like to implement eventually. Since it's mostly an experiment I am working on for RPG in a Box, for now it's mainly just meant to be a fun experience of running around killing monsters and opening doors, hehe. Thank you again for the message, and stay tuned for updates! :) 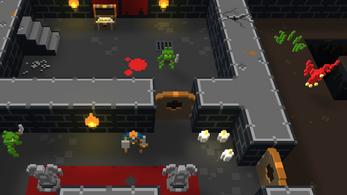 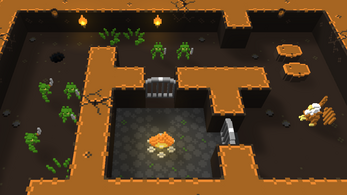 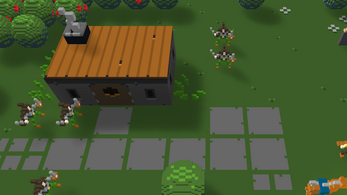 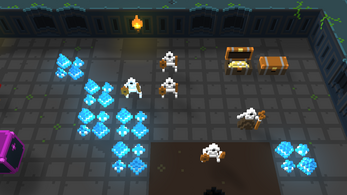 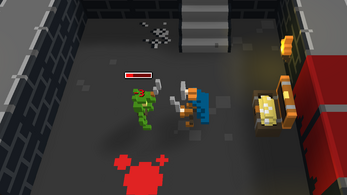