Hello again! It's hard to believe it's already been a month since my last development update. I truly appreciate everyone's patience as I work my way through a lot of repetitive work to get the existing functionality ported over to Godot 3.0. I'm quite eager myself to move onto major new features, and I can imagine everyone else is as well! Things are slowly but surely starting to come together. :)

These past few weeks I have mostly been focusing on the Map Editor and related functionality. In parallel, I'm also trying to keep the game migration tools in the currently released version up-to-date to ensure that the process of migrating your existing projects will be as painless as possible.

As with the Voxel Editor, I've also been implementing some minor new features and usability improvements here and there as I go to make v0.5 even better! 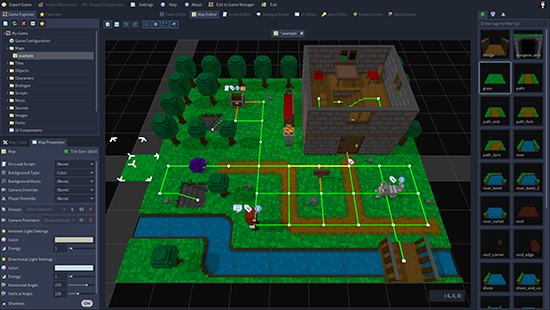 Below is a closer look at the improved visual indicators displayed for the navigation paths in your map. Small cubes are displayed at each intersection now (i.e. the center of the tile) and the paths themselves will follow the terrain more closely than in the current version. 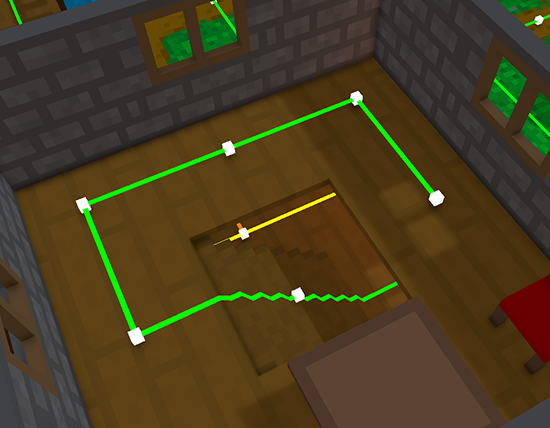 A minor new feature I added is a "crosshair" for the Map Editor that will display when placing resources into the map. This should be useful as a guide for lining up tiles and objects, and to generally have a better feel for exactly where the placement will occur.

Tiles now have a "surface level" setting that can be adjusted to make the placement of related tiles less tedious. For example, for my set of grass and water tiles, you can set their surface level to the grass height, and the Map Editor will automatically adjust the vertical placement accordingly.

Some of the more recent effort has involved getting the Map Properties panel implemented and fully working so you can modify things like the light/shadow settings, camera override, "on load" script", etc. I've also played around a bit here and there with some of the new features available in Godot 3.0, one being GI (Global Illumination) Probe. As you can see in the before and after images below, this can really improve the way objects are illuminated, so I may have to add this as an option at some point! 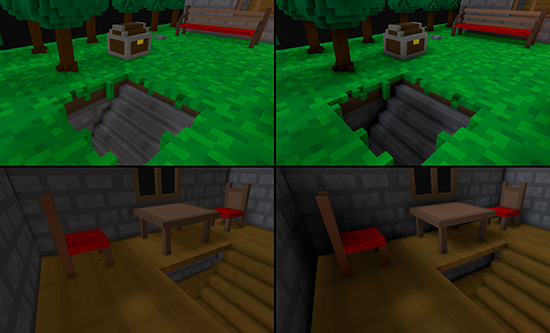 I mentioned my "Demo Game Hub" in the last development update, but it wasn't quite released at that point, so I thought I'd share about it again in case anyone is interested in trying it out. The hub currently allows you to try out the official example game (standard or first-person camera) and an area from Ultima V (Iolo's Hut). I'm hoping to add some more of my demo maps to it in the coming weeks!

On a note related to Godot (the engine RPG in a Box is built with), they made an announcement that the engine would be transitioning from OpenGL ES 3.0 to Vulkan for its backend, which is exciting news! If you're interested, you can read more details about the announcement here: Godotengine.org

If you'd like to find out more about RPG in a Box or try out the free demo version, check out my Itch.io page here. Once again, thank you for reading and for your continued support! :)

I enjoy to see some of my suggestions coming in, little by little (like the "crossair" on the map editor, i'm sure i was not alone to suggest it, and now it's there). You have a nice tool, and a great heart at doing it and improving everything.

Thanks for the kind words! I'm happy to be able to implement one of your suggestions. :)